Travelling through West Africa is about as challenging as it gets. Travel times are long and uncomfortable, you are constantly bombarded with hustlers and scammers and the dirt gets everywhere. However, the culture and way of life and markets are amazing. The few tourists that do venture here, travel in large tour groups, rather than with backpacks. I spent 3 weeks travelling around the region with my friend Henry, with half that time in Mali. With this trip, I have now passed the 100 country mark and it is probably appropriate that this was the toughest trip of all... 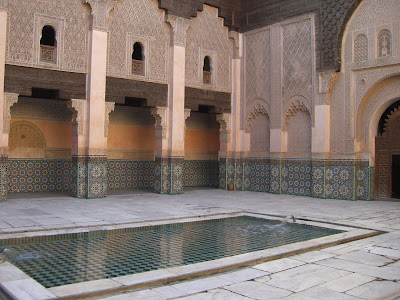 The journey began with a relaxed few days in Marrakesh, wandering around the maze-like souqs and alleys. The main square, Djemaa el Fna is an amazing buzz of activity, with snake-charmers, story-tellers and street vendors. The city walls are all pink with the beautiful backdrop of the snow covered Atlas mountains. There is some amazing Moorish architecture, with beautiful tiled buildings and arches. My favourite was the Ali Ben Youssef Madrassa (see photo). I was surprised at how low the standard of living was in Morocco - a reminder that this is still Africa.
We also went to Casablanca, the most developed part of Morocco and the centre of commercial activity. The King Hassan II mosque was very impressive, built on its own island in 1993 at a cost of half a billion dollars. We also wandered around the medina to check out the art deco buildings, but these were nothing special. This taste of Morocco has definitely made me want to go back and see more. However, I would do it the warmer months - December was really cold!

Gambia
Next up was a few days on the Atlantic coast of Gambia, a small former British colony. Gambia gets a lot of British beach holidaymakers. I found this surprising, because the beaches are nothing special. Through our travels in West Africa, we stayed in the full spectrum of accommodation – from Presidential style suite, to just a thin mattress on the roof of a guest house. In Gambia we stayed at the Sheraton (using points) and got an amazing villa, which made our time there much more enjoyable. We did day trips to the Serrekunda market (a huge buzzing African market), fishing villages and to the large Gambia river that runs through the country. The fishing villages are a cool spectacle, watching the fishermen bring in their catch and negotiating with buyers on the beach as soon as they arrive. Overall Gambia was nice, but the aggressive hustlers were really offputting – everywhere you go people try to sell you something. We witnessed several local fights, including our taxi driver who was taking us on a tour, and got embroiled in a road rage argument with another driver. 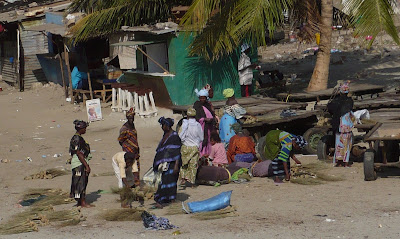 We travelled up overland from Gambia to Senegal, which was a tough journey involving 6 connections (complicated due to the border crossing) and more hustlers and scammers. One hustler followed us around for 15 minutes around Barra bus station and then started insulting us when we would not use his service (and was surprised when we still refused after this). However once we left the border area of Senegal there was less hustling than Gambia and it was more enjoyable. We visited M’bour and Joal-Fadiout along the coast, which were both interesting small towns. The latter is on a pretty island built entirely of sea shells. The local transport into Senegal and up to the capital Dakar was in 7 seater Peugeot taxis, which are really cramped, hot and uncomfortable. However, we stayed at the Le Meridien in Dakar (using points) and got upgraded to an amazing suite, which was the largest I have ever stayed in. Dakar was nothing special – big, polluted and chaotic with few sights, although the nearby pastel-coloured Ile de Goree was delightful. We were also a little creeped out by a guy that kept following us through the market for half an hour at a distance, and grabbed my friend’s arm at one point. 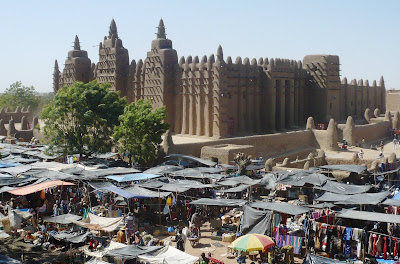 Our final and main destination was Mali, the 4th poorest country in the world, which has an abundance of mud-brick villages and mosques. Mali was amazing and easily makes it into my list of top 3 places visited. We flew into Bamako, the capital, and after waiting 3 hours for our bus to fill up, spent 13 hot hours travelling to Mopti. The journey is supposed to take 7-10 hours but the bus kept stopping in each town to pick up passengers. And we met another scammer. This one got into our taxi as we were leaving our hotel in Bamako for the bus station and claimed to work at the hotel. He said he knew of a good hostel in our destination and insisted on making a reservation for us (which we told him not to). He then tried to exhort cash for the phone call he allegedly made otherwise he claimed he would not get his passport back. He then told another set of backpackers that we were in a band with him and he was helping us obtain 80,000 francs from Western Union and could they lend him their phone. After we told them not to trust him he got angry, made several threats to assault us and took my sunglasses as a ransom for the phone call money. I then made a scene and demanded he return them. Luckily the onlooking locals supported me and I was able to grab them back from him.
Mopti was a lovely town and we explored the area along the river banks, the port and mosque. We also did a boat trip on the Niger River and visited some of the small mud-brick villages along the river banks, which are without electricity. As is true of most of the country, life in these villages has remained unchanged for hundreds of years. Women grind wheat, smoke fish in the sand and wash clothes in the river. Men herd goats and cattle and travel around by donkey-kart.
Our next stop was Timbuktu, the famous town with a glorious history as a centre of learning and trade. We flew up with Mali Air Express, which has such a streamlined business model that their sales agent in Mopti, from whom we bought our tickets, drove us to the airport, handled the flight check-in and escorted us onto the plane. Today Timbuktu is a shadow of its former self, but remains a charming and interesting place. There are plenty of maze like alleys and beautiful mud brick buildings and amazing desert villages. We decided to stay with a family there, to get more of a local experience, sleeping in their living room. That would be the start of many a rough night of budget accommodation, which were the opposite end of the spectrum to the luxury hotels we stayed at in Gambia and Senegal. At our next stop, Djenne, we stayed on the roof-terrace of a hotel under the stars on thin mattresses because all of the town's hotels were full. We headed up to Djenne for the famous weekly Monday market, for which people travel to from all over the country to trade and shop at. The island town of Djenne is incredible and was my favourite town in Mali, with the largest mud-brick mosque in the world. The market is quite a spectacle and pretty much every tourist in the country descends on Djenne that day too. This creates a bizarre weekly cycle in tourist travel in the country, with the town empty the rest of the week. 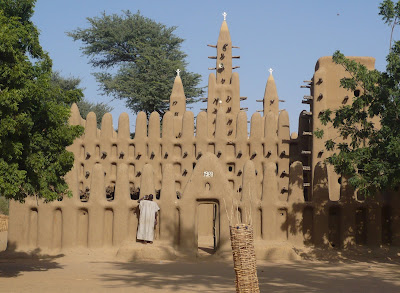 The final place we went to was the Dogon Country, an area with villages set along a large escarpment with stunning views all around. However, our trip was tarnished because I got sick with a stomach bug after the first day of a three day trekking tour around the villages. I had diarrhoea and vomiting for several days after. After the first day, I had to stop the trek and stay in a village as I could no longer continue. It was also the worst place to get sick – miles away from anywhere and we were again staying on thin mattresses on a roof-terrace. To get to the hole-in-the-ground toilet, I would have to climb down a tree trunk ladder in the dark (as there was no electricity). It was a disgusting toilet and contained hundreds of flies in the morning. After 2 days there, not eating anything, we had to move on to head back to Mopti for our flights home. It was a shame to have had the trek cut short, as the Dogon Country is, ironically, described by the Lonely Planet as being one of the ‘top 10 places in the world to see before you die.’ It was another painful set of local transport to get back, including a van which kept breaking down due to a faulty exhaust. The journey which took us 3 hours on the way down took 7 hours to get back. It was a tough few days and a week later my stomach has still not recovered. I’ve also lost about 10% of my body weight in the process. I think I will be putting away my little backpack for the time being in favour of more relaxing travel destinations...
Overall though, it was a great trip with some amazing towns and villages in Mali. I would highly recommend a visit to Mali, although maybe in an overland or organised tour. I also hope to get back to Morocco some time and explore some Moor of the country's architecture...